You will be surprised to know how often an elderly person can get locked inside a bathroom. Have you ever wondered how to get into a locked bathroom door in case of an emergency?

Getting locked inside bathrooms or not being able to open bathroom doors is more common with young children and seniors who suffer from arthritis or other musculoskeletal issues. If you have a young child or a senior in a house, it is essential to have privacy locks installed on the bathroom door. These are locks that one can open by standing outside if needed. 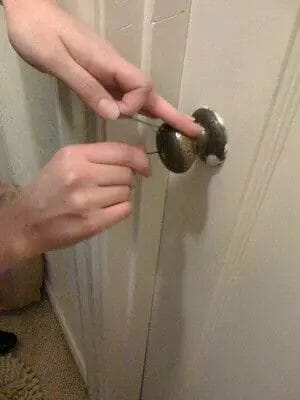 In this article, we will talk about the two main types of privacy locks and how to pick them using everyday items around the house, if ever the need arises. If you want to know how to make the bathroom more safe and convenient for a senior, you can read our article about taking care of seniors and elderly parents.

There is a very wide variety of locks available today. They can be largely classified into 2 kinds. The first ones are locks meant to ensure safety (typically used on the front door or else on lockers meant for safekeeping). These go from the basic padlocks and deadbolts right up to high-end electronic locks.

The second type of lock is more interesting. These locks are known as “privacy locks” and they have a conflicting dual purpose. They are designed to make sure that others are kept out when needed but to be easy to pick the lock if the need ever arises. This type of lock is for indoor usage, mostly in bedrooms, and bathrooms.

Privacy locks usually come in two varieties. One will have either a handle or a knob with a push-button in it which is used as a privacy function. The lock remains free to open until someone pushes the button from the inside, at which point, one cannot open it when they stand outside. The other type has a thumbturn. The lock will have a latch that can open at all times but when the thumb turn is locked, the door will not open from the other side.

You may also like Best Door Alarms for Dementia

Determine the Type of Lock

Before opening the lock you need to determine whether it is a push-button lock or a thumb turn (this is important). If the knob on the outside has a smaller hole, then it is most likely a push-button option. If the hole looks like it can accommodate a  small size key, then the likelihood is that this is a thumb turn.

How to Unlock a Push Button Lock?

As mentioned above, a push-button lock will have a little pinhole on the outside in the center of the knob or lever. Behind this pinhole is the button that can release the lock, and therefore this is where we are going to concentrate our efforts on opening the lock.

A very simple trick, in this case, is to find a thin wire or a pin or a paper clip that can fit into this hole. If you are able to insert any of these items inside the small hole, the button to release the lock is exactly at the center of the knob or lever. You need to keep the pin or wire absolutely horizontal otherwise you can miss the button.

Patience, and keeping calm are important – otherwise, it may take many more attempts than is required, especially in an emergency!

Another way to achieve the same results is to use a butter knife, and insert it into the hole of the push button locks’ doorknob, as though you were putting in a key. Then all you need is to twist it gentle while twisting the knob and it should open up.

You may also like How to Adjust an Anti Scald Valve

How to Unlock a Thumb Turn Lock?

Thumbturn locks are the ones that can be locked by turning them using your thumb and index finger. Just like push-button locks, these locks also have a hole on the outside of the lock. Usually, this hole is significantly bigger than that of a push-button lock. The reason for a bigger hole is to allow for an emergency key, which comes along with the lock.

Unfortunately, most people either throw away the key or forget about it, and only remember about it when the door gets locked from the inside! If you are ever installing such a lock in your bathroom, do remember to keep this key safely. It can come in quite handy in such a situation.

However, in case you do not have this emergency key, it may be enough to know what it looks like – they typically have a flat tip, much like your very own screwdriver! So what you end up needing is a very thin, flat head screwdriver which can fit through the pinhole. Typically precision screwdrivers can do the trick.

Just like the push button lock, you need to push the screwdriver in a horizontal manner until you reach the release button of the lock. Then rotate it until it fits into the slot in the button and slowly turn it, similar to a screw. Try turning clockwise, but if it does not work sometimes counterclockwise will also do the trick.

Using a plastic card to open the locked bathroom door

Another method that you can use, which works on both push buttons and thumb turns are to use an unused or old credit-card-like plastic card. Good examples of old plastic cards are gift cards or membership cards. Also remember that this method will work only when the lock-in question has a slanted latch, and the slant is facing towards the outdoor instead of indoors.

After some time, the card should be able to push the latch back and get between the latch and frame, at which point the door will open!

There are lock picking sets available in the market that also have a card-like thin instrument that can be carried around easily. These can be purchased at major retail stores and usually also have a variety of other instruments for picking any kind of lock.

Very rarely, a home will have a deadbolt lock on a bathroom door. In such cases, there are two methods to pick the lock from outside the bathroom, and both are fairly involved.

One of the best methods to pick a deadbolt lock is to use 2 bobby pins (or any other small strip of metal which can be used as a pin). Insert the looped side of the bobby pin in the lock’s bottom.

Insert the other part of the second pin at the top of the lock and move the two back and forth. This should ideally unlock the deadbolt. If it doesn’t, reinsert the first pin before trying again.

Bump key sets are easily available at major retail stores. You can insert the bump key into the lock and use a heavy object to hit the end of the key towards the door, forcing it to unlock the door. 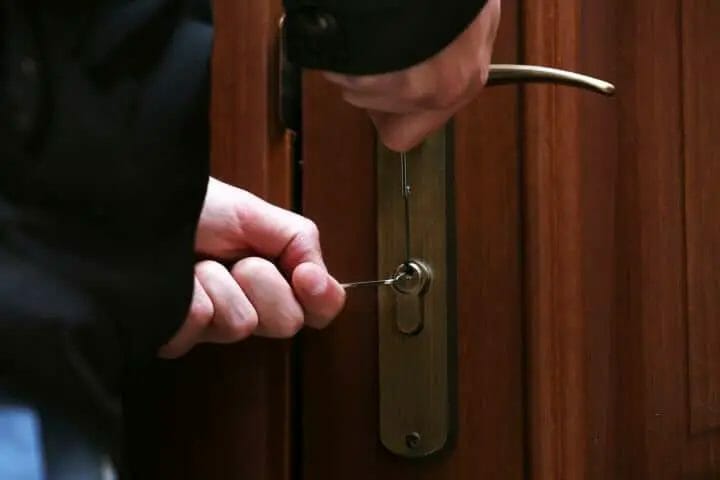 You may also like Are Hot Tubs Safe for Elderly People?

How to Get Into a Locked Bathroom Door by Removing the Door Handle?

This method should only be used if the previous methods have failed, and you are desperate! It takes a lot longer to do this! If you can see the external screws on the handle, you can use a screwdriver to unlock these. Once the screws are taken off, you can put the screwdriver inside the lock and twist it gently and it should open.

If there are no visible external screws, use a flat head screwdriver and slip it under the doorknob, then gently lift it up to expose the screws under it.  After that, you can follow the process that was explained above.

This is clearly the last of the very last option. This should only be tried in the case of a true emergency, and when nothing else described above is working.

What you need to do this is a very heavy object (like a hammer), a towel or sponge or bulky clothing items, which can be used to cover the lock before hitting it so that debris doesn’t fly off everywhere, and lastly, a piece of cardboard which you can insert between the lock and the door to protect the paint, by making some space with a flat head screwdriver.

Once you have all of this in place – bash away! And since it is likely that the door will also be damaged in the process, be prepared to change both the lock and the door as well.

You may also like Wall Mounted Folding Shower Seat Reviews

Bathroom falls are one of the highest causes of home injuries in the world. Thousands of people are admitted to ER’s every year due to unfortunate accidents in the bathroom. In an emergency, if the person inside the bathroom is incapacitated, every second before you can open the door can count.

Knowing how to be able to enter a locked bathroom door is important for everyone to know about. We hope that this article has helped readers understand this small but essential skill.

Here is a helpful video that will make it easy for you to open the locked bathroom door.