This article will compare Cubii Vs. Cubii Jr – User Reviews, Experience, And Costs

It is often difficult to maintain a level of fitness after a certain age. Your body loses its agility and strength, and it becomes tough to workout at a gym or with heavy-weight equipment. But working out should not be a prisoner of age or lifestyle.

It is with this mission in mind that Cubii started out in 2014 by three young entrepreneurs, who won first prize with their business idea at the Chicago university’s business idea contest. They filled a gap in the market that was being left unaddressed – a workout machine that is accessible to all. Thus was born the Cubii under-desk elliptical, a product that broke many conventional ideas on what a workout machine should be like.

Today, both the Cubii pro and Cubii Jr are under-desk ellipticals that have carved out a new category of fitness enthusiasts in the elderly and infirm. This article will dig deep into both the seated products’ features and declare a winner for each feature in this Cubii Vs. Cubii Jr contest.

Both of them provide excellent features, and they are perfectly optimized and safe for the elderly. But if you are just looking for an overview:

Arnav Dalmia, the founder of Cubii, was tired of sitting the whole day as an intern requested his company for a standing desk; his company refused. That was when the idea of under desk ellipticals originated.

The Cubii Pro has eight resistance levels that means whether you are a beginner or a seasoned elliptical user, you will always feel challenged.

It comes with an LCD monitor that displays strides, strides per minute, time, and total distance so that you can keep a close tab on your workout, as you continue to finish your day’s work.

Cubii Pro is the only seated elliptical in the market with Bluetooth connectivity. It lets you connect the device to any other tracking device such as a Fitbit, apple watch, or mobile.

Let’s see some of its pros and cons:

You may also like Best Electric Tricycles for Seniors

This elliptical is also a premium product of Cubii. The Cubii Jr also features multiple resistances and an LCD monitor that show you your workout data and lets you track your progress.

It is way more affordable than the Cubii pro that comes with Bluetooth. Other than that, it has an extremely sturdy design making it safe for the seniors. Cubii Jr’s dimensions are 23.15 x 17.54 x 10 inches, and it weighs 27 pounds, which is slightly less than the Cubii Pro.

Let’s see some of the pros and cons of the Cubii Jr. 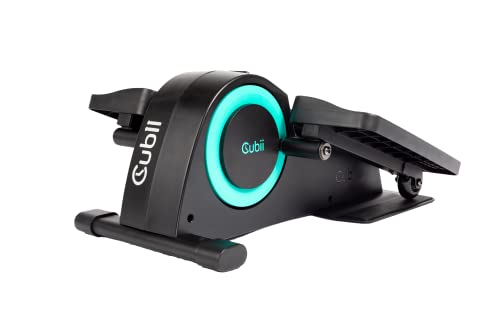 You may also like Are Treadmills Safe for Elderly?

Both models from Cubii have eight levels of magnetic resistance. You can set the resistance through the dial on the ellipticals. The resistances are perfectly made for the elderly and suit their needs. They are not too high, so they won’t be an issue for you, the seniors, to use.

It’s hard to mention a winner in this category as both the ellipticals offer the same amount of control over how intense your exercise should be.

Both the machines are compact and pretty much have the same size. They both feature a handle to carry it around with you anywhere you go. The main difference is in both the machines’ weight, which is a significant factor for the seniors. The Cubii Pro is 5 pounds heavier than the Cubii Jr as it weighs 32 pounds, whereas the Cubii Jr weighs only 27 pounds.

The difference of 5 pounds can be significant for the elderly, especially if you have weak arms and need to move around the device. This makes Cubii Jr. the winner in this category.

Both the ellipticals feature an LCD monitor that shows you enough data to track your workout. Tracking the workout is exceptionally important as you can get demotivated if you don’t continuously see the results. It’s hard to see any physical changes right away as a senior.

The LCD monitor of both the seated ellipticals shows you the calories burnt, time, distance, and strides per minute.

This feature is the most significant difference between the two counterparts. The Cubii Pro comes with Bluetooth connectivity that lets you connect the elliptical to any of the other tracking devices ranging from a Fitbit, apple watch, or your mobile.

You only need the Cubii App to connect it to your mobile, and you can track your progress right from your mobile. Connecting it to other devices also lets you track some other things like your heartbeat, which is essential for seniors.

Connectivity is important because in order to track your progress over time, you need to store your data in an easy-to-use format, and what better to do so than in your mobile phone which can show you all the data at the touch of a button. Imagine if you are trying to see whether your heart rate has increased during exercise over two months of exercise, how else will you know?

The Cubii Jr does not feature Bluetooth, so you have to manually track your performance all the time.

You may also like Best Stationary Bikes for the Elderly

Both the machines have the same level of resistance, but the Cubii Pro claims to burn up to 125 calories an hour, whereas the Cubii Jr. does not make any claims like this.

Still, it will be good to guess that they will be burning the same amount of calories, but this round goes to the Cubii Pro due to the claim.

Both the ellipticals are almost identical in this aspect as both are whisper quiet and do not make any noise still; the Cubii Pro has a slight edge over Cubii Jr here. You can use this anywhere while doing anything else. For instance, if you are reading the newspaper, reading your favorite book, or writing your diary. 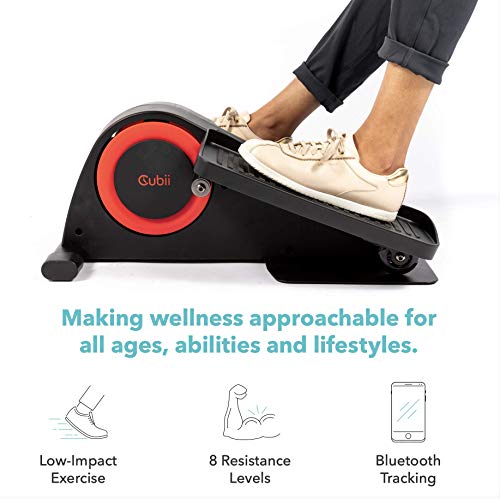 You may also like Best Bicycle For 50-Year-Old Man

As the Cubii Pro is much heavier, it can cause some scratches on a wooden floor. It’s not usually the case with the Cubii pro as it is 5 pounds lighter. One of the versions of the Cubii Jr., which is slightly more expensive than the regular version, and has a premium mat included in the package for the safety of your floors. 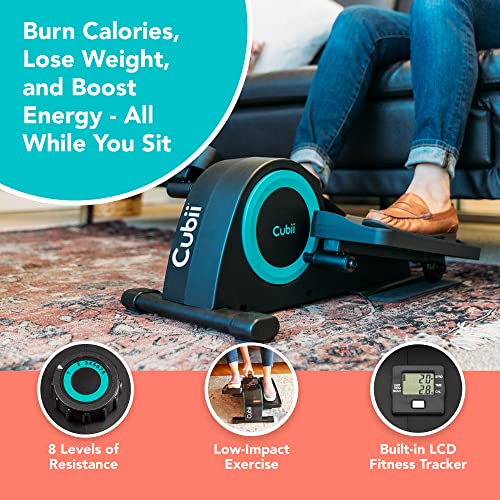 You may also like Best Mountain Bike For Older Riders

Both the Cubii Pro and Cubii Jr. have similar features, but some features and specifications make both the seated ellipticals stand out.

In this section, we will list out the stand-out features for both the under desk ellipticals.

You may also like Best Hybrid Bike For Seniors

Use the Cubii Pro Under Desk Elliptical if

Check this product out if you need the best under desk elliptical in the market.

Use the Cubii Jr. Under Desk Elliptical if

Check out the Cubii Jr. if you need slightly budget-friendly seated ellipticals with almost all the features to be called one of the best in this category.

For more option, you should read Best Ellipticals for the Elderly.

[1] The Cubii Story: Creating a Category for a New Product