Fibromyalgia is (quite literally) a pain to live with. Patients typically suffer from debilitating fatigue and chronic widespread pain.

They deal with insomnia and struggle with memory, along with a slew of other symptoms.

This illness is usually managed with medication and therapy, but many sufferers may wonder if there is anything else they can do to relieve their symptoms.

Luckily, there is evidence that certain supplements could be helpful in treating this disease.

Below is a list of vitamins and supplements that can ease fibromyalgia symptoms, along with explanations of the particular symptoms each one helps treat.

If you are more visual this video will show you the supplements you can consider to fight Fibromyalgia.

These supplements are not meant to be substituted for medical interventions.

However, they can be combined with medical care to improve the day-to-day life of someone with fibromyalgia.

Almost Everyone Is Deficient in D

Many people may assume they get enough vitamin D from going out in the sun and consuming dairy.

On the contrary, the majority of people are vitamin D deficient to some degree.

This is not a deficiency to take lightly; according to the Harvard School of Public Health, research has indicated that vitamin D deficiency is strongly correlated with the development of many diseases.

Fibromyalgia is one of these diseases, along with multiple sclerosis and type 1 diabetes.

This is significantly higher than the percentage of healthy people with a vitamin D deficiency.

Researchers still are not sure whether vitamin D deficiency causes fibromyalgia; it could be the other way around.

Although this has yet to be settled, it may help some individuals to take daily supplements until their levels are normal.

You can watch the video to learn more about research that has been done on vitamin D deficiency and fibromyalgia.

It goes into detail about the history of this research and the pros and cons of various studies.

You can find them as either regular pills or sublingual tablets. The pills are typically sold with either 2000 or 5000 IU per pill.

You should consult with your doctor about how much vitamin D you should take. It is possible, though difficult, to overdose on this vitamin.

Your doctor may want to order blood tests to monitor your vitamin D and calcium levels as you take this supplement.

You can also increase your exposure to vitamin D naturally by consuming more dairy or going out in the sun more frequently.

Avoid spending too much time in the sun, of course, because UV rays carry risks like sunburn and skin cancer.

Insomnia is a common complaint of fibromyalgia sufferers. A potential solution to this is melatonin supplements.

According to the NIH, Melatonin is a hormone that your body naturally produces to induce sleep. It can be taken as a pill to help adults with insomnia.

You should take melatonin in the evening before you go to bed. Also, avoid drinking caffeine late in the day to ensure that you get a good night’s rest. You may also want to cut back on alcohol, which is detrimental to sleep quality.

5-HTP, or 5-hydroxytryptophan, is another chemical that the body manufactures naturally.

Your body takes tryptophan, an amino acid found in food, and converts it into 5-HTP. 5-HTP is then converted into serotonin.

According to the University of Maryland’s website, there is evidence that 5-HTP supplements can help increase the amount of serotonin in the brain.

5-HTP has therefore been suggested as a potential treatment for both depression and fibromyalgia.

People with fibromyalgia usually have less than optimal levels of serotonin, so some doctors prescribe antidepressants.

For some patients, 5-HTP may work just as well as antidepressants to alleviate symptoms such as fatigue, stiffness, and anxiety.

In addition, 5-HTP has been shown to help with sleep and pain management. It can take several weeks of supplementation before improvements in sleep can be seen.

It is important to note that 5-HTP does not help everyone who has fibromyalgia. More research is needed to determine why. However, it doesn’t hurt to try taking this supplement and see if it helps.

5-HTP supplements can be conveniently purchased online. You may also find them at the drugstore if you are lucky.

Vitamin B12 Is Supposed to Get on Your Nerves

Vitamin B12 is essential for a healthy nervous system. The body uses it to maintain nerve cells as well as to produce red blood cells. Your body also needs vitamin B12 to obtain energy from food.

According to the University of Maryland Medical Center, people who are low in this vitamin tend to experience fatigue, anxiety and tingling in the extremities.

These symptoms also plague fibromyalgia patients, so it is especially important for them to keep their B12 levels up.

B12 supplements are easy to find; note that vitamin B12 and cobalamin are different names for the same compound.

People who have the highest risk of vitamin B12 deficiency include vegans, vegetarians, and people who have problems absorbing nutrients (such as those with certain autoimmune diseases). These groups typically do not get enough B12 through diet alone.

If you have fibromyalgia and are in one of the high-risk groups listed above, you should definitely consider taking a vitamin B12 supplement. While uncommon, a severe enough deficiency can lead to nerve damage. 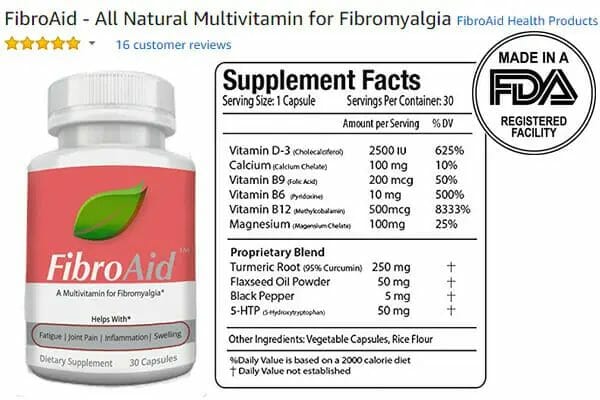 Magnesium Deficiency Can Be a Vicious Cycle

According to researcher Mark London of MIT, fibromyalgia patients are more likely than the average person to be deficient in magnesium.

London says that high levels of stress can cause a person’s magnesium to drop.

Fibromyalgia patients obviously deal with copious amounts of stress daily due to their condition. This is why they tend to be vulnerable to magnesium deficiency.

Magnesium deficiency can then cause fibromyalgia symptoms to worsen, which leads to magnesium levels dropping even lower.

For example, insomnia is a common symptom of fibromyalgia. Lack of sleep causes changes in hormonal composition, which leads to a reduction in magnesium levels.

The body needs magnesium to produce ATP, which is the body’s energy source.

Then, low levels of ATP cause fatigue to worsen. Fatigue causes the body more stress, and thus, a vicious cycle is born.

Magnesium is also important for healthy nerve function, so a magnesium deficiency can contribute to the chronic nerve pain most fibromyalgia patients endure.

Based on London’s research, magnesium may be one of the most important vitamins for someone with fibromyalgia to take. You can read more about his research by clicking on the link with his name.

Carnitine Is Not Just for Meatheads

Carnitine has a reputation as a performance-enhancing supplement for athletes.

However, carnitine is a completely natural compound that the human body produces. It is also found in a variety of dietary sources, from beef to green vegetables.

Patients with fibromyalgia tend to have low levels of carnitine, and research has shown that supplementation can significantly improve fibromyalgia symptoms such as chronic pain and depression.

A 2007 study demonstrated the benefits of specifically acetyl l-carnitine. L-carnitine is one of the two main isomers of carnitine, the other being d-carnitine.

In the study, the researchers divided 102 patients into a control group (who took a placebo) and a group that took carnitine supplements.

The study lasted for 14 weeks; patients were evaluated for symptom changes throughout and after this period.

Multiple methods were used to measure symptoms such as pain and tiredness; the carnitine group improved immensely.

Based on the encouraging results, the researchers concluded that carnitine seems to be a viable treatment for fibromyalgia symptoms.

More research will hopefully come out in the future, but in the meantime, it wouldn’t hurt to pick up some l-carnitine supplements from the drugstore.

Seriously, you don’t have to be a bodybuilder to take carnitine. It’s backed up by science!

To recap, the six vitamins and supplements discussed here were vitamin D, melatonin, 5-HTP, vitamin B12, magnesium, and l-carnitine.

All of these natural substances have been shown to improve symptoms of or related to fibromyalgia.

Fibromyalgia is a difficult illness to live with, and unfortunately, there is no cure. Even with the best doctors and medical treatments, patients may still have a lower quality of life than they desire.

Taking scientifically supported vitamins and supplements can be part of an effective treatment plan for someone with fibromyalgia.

If you plan on taking any new supplements, make sure to let your doctor know.

Your doctor can order tests to see if you are deficient in certain vitamins and minerals, such as vitamin D and magnesium. He or she can then monitor your levels and help you decide how much to take per day.

Finally, if you want to see more research on vitamins and fibromyalgia, consider becoming a research participant.

This is an effective way for you to help scientists make progress in knowing how to treat this painful disease.

As this video explains, a whopping 93% of fibromyalgia patients are deficient in this vitamin.