Almost all adults know – and possibly love – the feeling of that first sip of coffee in the morning, and how it can bring us comfort, wake us up and even help us get ourselves together for the day. There are some medical conditions, though, where doctors will ask their patients to abstain from drinking coffee or really monitoring the amount of coffee they drink. 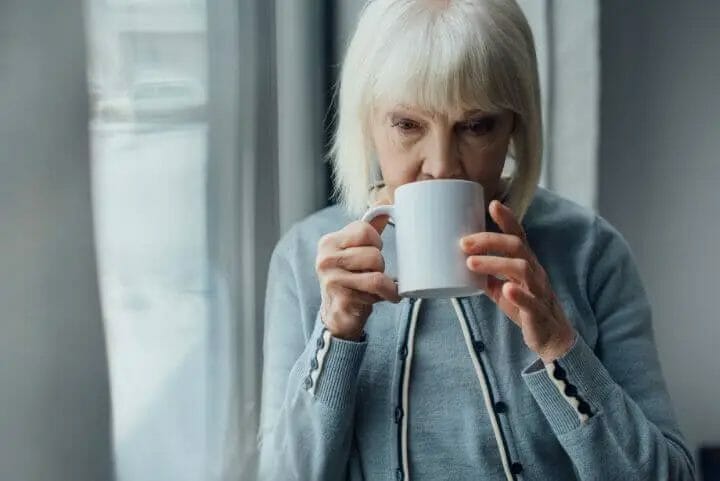 When someone is diagnosed with dementia, their loved ones will likely ask if the patient is still allowed to have coffee as it is a stimulant and could potentially exacerbate the symptoms of dementia their loved one is already living with.

Another question that comes up frequently is whether their loved one’s caffeine intake in their younger years has anything to do with them developing dementia. Here’s a little more information on dementia patients and drinking coffee.

There have been several studies done on this topic – including monitoring people for years while controlling their coffee intake to specific amounts.

Some studies found that those who didn’t develop any form of dementia were those who had significantly higher amounts of caffeine in their system, however, these studies are definitely not conclusive so they should not be relied on for certainty in a cause behind dementia.

Unfortunately, even with all the studies done on dementia patients and caffeine there still has not been one definitive answer on whether those diagnosed with dementia should avoid it or not. 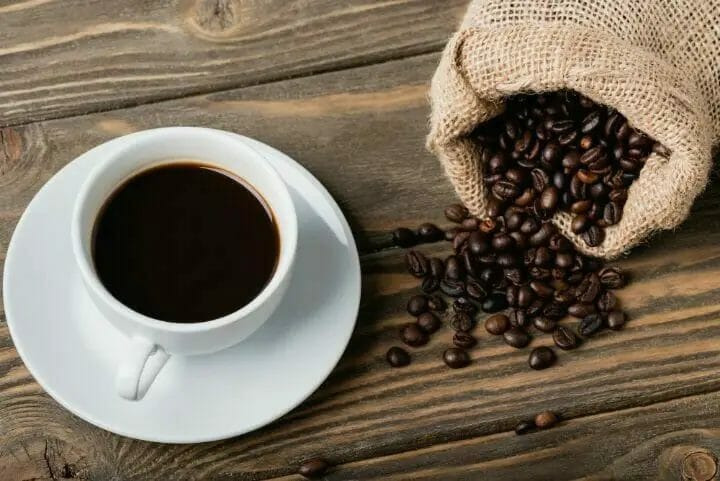 Many people living with dementia will have trouble falling asleep, and getting a night of restful sleep, so their family members or caregivers may suggest that they give up coffee or only have a limited amount to help with sleeping.

This is not to say that coffee is making it difficult for people with dementia to sleep, but rather that difficultly sleeping and getting a restful sleep is already a symptom of having dementia so coffee – if too much is consumed – could make this symptom that much worse for some people.

Most of the studies done on people living with Alzheimer’s or dementia are done with controlled groups meaning that everyone in the study has been diagnosed with one of these conditions and one group is given caffeine and the other is not. It’s difficult to tell with illnesses like these as to whether they would progress on their own (even without caffeine) or if the patient wouldn’t experience the same symptoms.

Additionally, since these diseases are different for everyone and each person’s reaction/symptoms don’t always look the same as the next person it’s almost impossible to determine a cause and effect relationship with something like caffeine intake.

You may also like Best Gloves and Mitts for Dementia Fidgeting

If your loved one really enjoys coffee then you might think that having them drink decaf coffee is a great substitute because they won’t get the side effects of caffeine and therefore affect their dementia symptoms.

There has been researched that has shown a connection between coffee and increased production of granulocyte-colony stimulating factor – and that has been known to help the brain in several ways.

Unfortunately, though, when this same study was repeated with decaf coffee the results were the exact same. This has lead researches to believe that it has something to do with the compound of coffee itself, and not necessarily whether it has caffeine in it.

Interestingly enough, recently there have been many suggestions that caffeine may actually help in the prevention of Alzheimer’s and dementia. 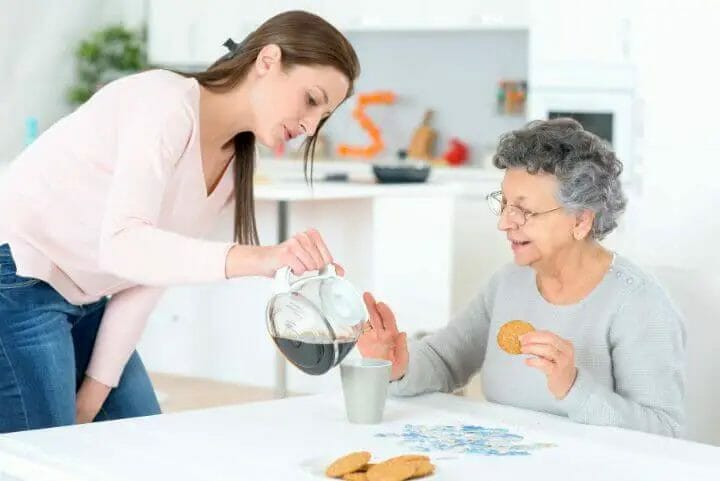 Why does this happen? It is believed that it has something to do with the role caffeine plays in blocking adenosine receptors, which are prominent in causing dysfunction and diseases as old age sets in.

Unfortunately, though, if someone has already been diagnosed with a medical condition this may not be the case. It is thought that once cognitive and neuro-psychiatric symptoms have started to show caffeine may have the opposite effect and may actually exacerbate the illness or cause it to progress quicker.

In fact, in several studies those who have already been diagnosed with Alzheimer’s or dementia do have some cognitive benefits from consuming caffeine, like almost all of us will experience.

However, in the long run it was found that the few benefits caffeine brings really do not outweigh the worsened symptoms they experienced as those symptoms are irreversible for the patient.

You may also like How to Get Dementia Patients to Bathe

Now, it really depends on a personal preference as to whether you want to keep drinking coffee/consuming caffeine after being diagnosed with Alzheimer’s or dementia. There have been a few studies done that show if someone consumed 200 mg, or less, of caffeine before taking a memory test their score was significantly improved than if they didn’t.

So these studies show how caffeine helps in the short-term as it was consumed close to when the participants took the  test, but there wasn’t any work done to see about long-term effects (in these studies, anyways). 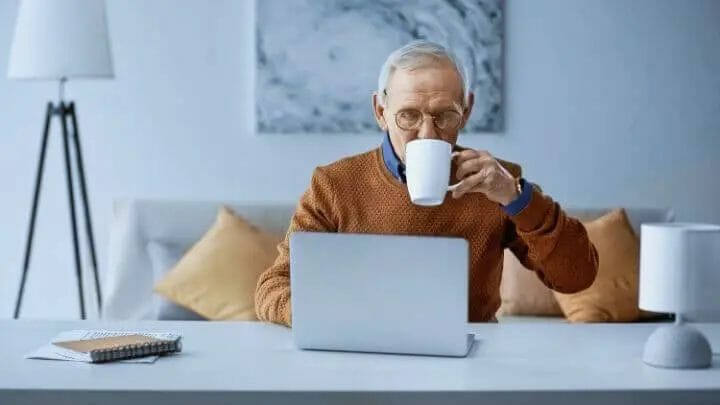 For these studies, participants took a caffeine pill and looked at images. They then were asked to come back one day later and asked which images they had seen the day before. The researchers involved in these studies found that caffeine enhances memory by improving the consolidation process so that recall of information becomes easier.

What is important to note is that some participants were given 300mg of caffeine, instead of 200mg. These people, who received more caffeine, actually did not do any better on their image recall test and they reported side effects such as headaches and experiencing jitters. From this research, it would appear that 200mg of caffeine is an upper limit on where the benefits of caffeine end.

Many of us really enjoy a cup of coffee in the morning with our favorite coffee maker and coffee mug to help us start our day or even just to enjoy the quiet before the rest of our family wakes up. If you enjoy coffee it may actually help decrease your risk of developing Type 2 Diabetes.

Specifically, when compared to someone who did not have any coffee in a day, those who had 6 cups of decaf coffee were associated with a 33% lower risk of developing the condition. 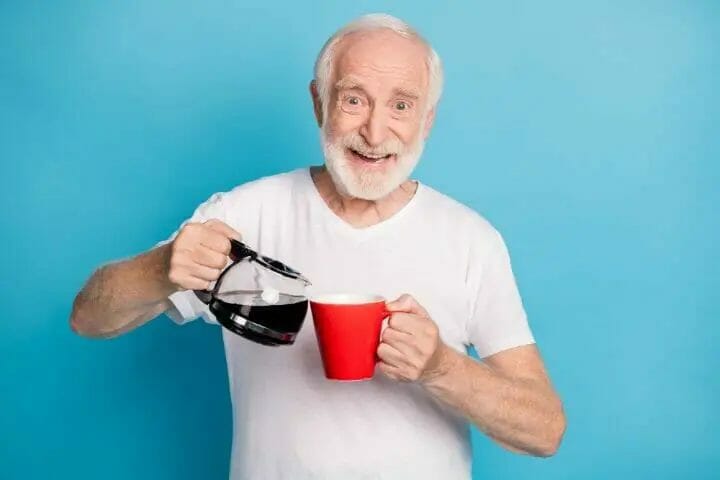 If 6 cups is just too much for you (and that’s completely understandable – that’s quite a bit of coffee or anyone to ingest), even increasing your coffee consumption by just one cup every day can have as big of an impact as 9% reduced risk of developing Type 2 Diabetes, and 6% for those who drink decaf coffee.

This means it may not specifically be the caffeine content in coffee that helps with reducing this risk but rather something in make-up of coffee that contributes.

You may also like Non Stop Talking in Dementia

So Why Is This Important When It Comes to Coffee and Alzheimer’s or Dementia?

Glad you asked! Approximately 70% of people who life with Type 2 Diabetes develop Alzheimer’s or dementia. Some studies have even gone so far as to suggest that Alzheimer’s could even be the late stages of Type 2 Diabetes (though that line of thinking is very new and needs much more research done).

So what does all of this mean, really?

They don’t want to be a burden to their family or cause any issues. For you, and the rest of your family, you probably don’t really know what to expect and what is coming since the experience for everyone with this kind of medical disease is going to be different.

Your loved one may progress really rapidly or it could be very slow – it really depends – and no medical professionals really know how or why it happens the way it does. It does make sense, though, that you want to do what is the very best for your family member and remove anything from their life that might make living with this illness that much harder. 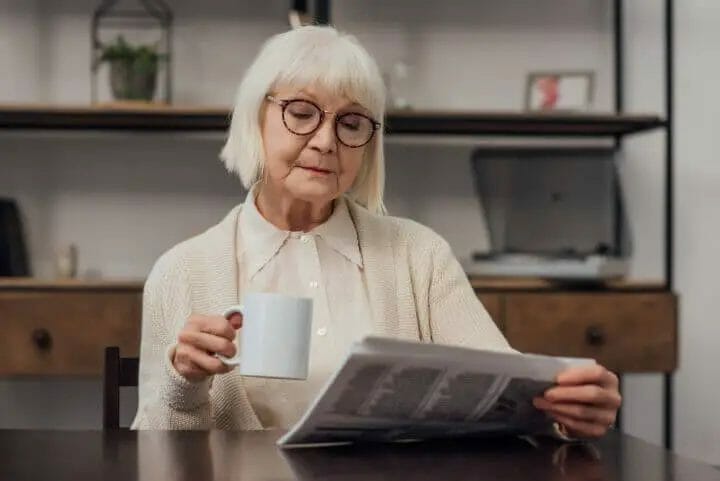 Chances are your loved one enjoys at least one cup of coffee every day, and you may have done some reading as to whether you should stop them from drinking coffee once they get this diagnosis.

Overall, you don’t have to if they really enjoy it. You may want to limit the amount they consume – as mentioned once someone hits about 300mg of caffeine the effects seem to disappear. You could also switch them to decaf if they are open to it and see if it works for them. The difficult thing about Alzheimer’s and dementia is that it’s very difficult to tell which symptoms part of the disease progression and which ones are due to specific environmental factors (like diet).

If you have specific questions about your loved one and what is the best for them, it’s always a good idea to check in with their doctor. Their doctor will be very familiar with their history and medical case so they can make specific recommendations.

By the way, we have reviewed products to help dementia patients including door locks, door alarms, bed alarms, busy boards, and game apps. Come and check it out.