Games are not only mediums of enjoyment and social interaction among children, they are extremely popular among the elderly. They are a means to keep the elderly engaged and help them keep mentally and socially active.

In this article, we will discuss the benefits of playing games and also about some games to play with elderly people. 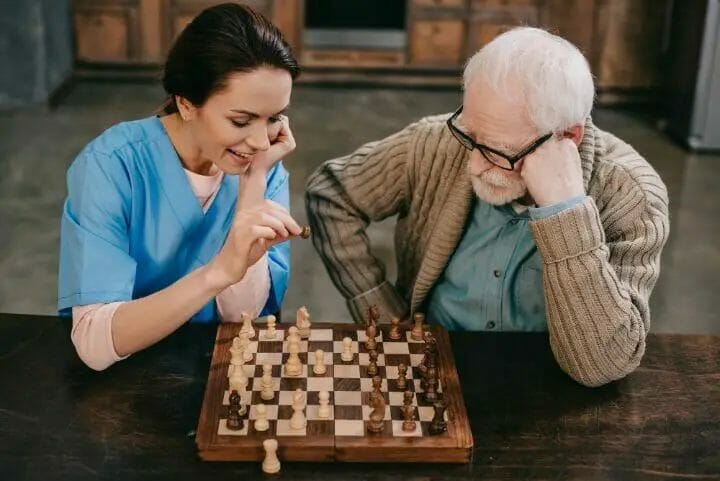 As we age, we tend to gradually lose our cognitive abilities and higher brain functions. A sedentary lifestyle with very little mental stimulation enhances this process. It is, therefore, very important for you to stay engaged with activities that promote thinking and cognitive functions.

As per a recent bulletin from the World Health Organization (WHO), an estimated 35.6 Mn people are living with dementia and some form of cognitive disability worldwide. This number is expected to double every two decades and may comfortably cross a 100 million people by 2050.

While there are many activities like solving crossword puzzles and Sudoku that the elderly can indulge in, they do not provide the extra dimension of social interaction as some games do.

Why Should the Elderly Play Games?

As we grow old, due to reduced mobility, it is increasingly more difficult to continue with our social lives and circles. Moreover, it is a common situation nowadays for the elderly to stay alone or just with their spouses, as gradually family sizes have diminished.

In either case, social networks and the inexpensive internet have gone a long way to facilitate playing games for the elderly along with their social circle.

Now, you can just plug into the internet and start interacting socially and start a game of scrabble or chess. Having said this, there are outdoor games as well which are good for the health and maintaining your motor skills, and they also allow you to interact with your friends.

In general, games should help the elderly lead much more fulfilling and happier lives, enhance cognitive abilities and reverse brain aging, as well as maintain their motor skills at an optimal level.

What to Look for in a Game for the Elderly?

The best way to go about your golden years is to mix and match between indoor and outdoor games – activities that require more physical work and those which require more mental activity.

The games you play must benefit you in at least one among the following three ways, or in any combination of them.

Depending upon your fitness and mobility, you may be more inclined towards outdoor or indoor games. The majority of the elderly do prefer indoor games which can be played in a group.

However, if you do not have the option of being close to your family and friends, you can leverage the internet to play the same games with your loved ones from a distance. Indoor games which are particularly interesting and enjoyable for the elderly are board games, card games, dice games, puzzles and trivia games. Outdoor games like golf and bowling are also extremely popular among the elderly, health permitting.

We have discussed in detail a few of these indoor and outdoor games below, that will help you in a combination of the three ways listed above – cognitive, fitness and social. This is by no means an exhaustive list and many variations of these games exist.

Scrabble is a board game of letters and words that can be played by 2 – 4 players. The board has 225 squares on which players form words with their options of tiles, where every new word must comprise of at least one existing tile on board. Scrabble can have the following benefits for the elderly: 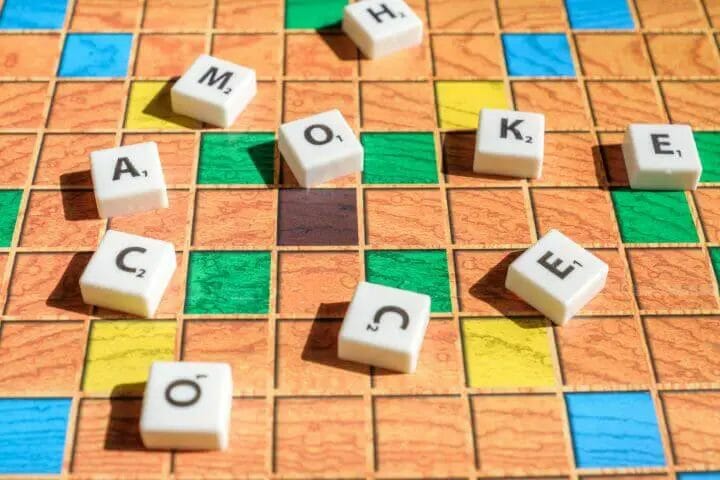 If at all anything negative, it may be argued that scrabble involves bit of luck as well and the outcome of the game depends on the letters that you are dealt with. That being said, luck is a factor that is not completely missing from any game.

Scrabble is a word game and there are variations like the Dabble, Word on the Street, Quiddler and Pass the Pen which you may also want to experiment with.

Chess is a 2-player strategy game that is extremely popular and is one of the widely played games in human history. There is strong research evidence that chess leads you to exercise both halves of the brain and definitely reduces the chances of Alzheimer’s disease.

The only negative point for chess is that it is a 2-player game and your social objectives may not be met by it. However, as a thought-provoking game or as a mental exercise it has few parallels.

You may also like Best Game Apps for Seniors With Dementia

Golf is an outdoor sport of club and ball and can be played in multi-player mode. The challenge is to hit golf balls into a series of holes on a golf course in as minimum a number of strokes as possible. If you are playing a full golf round of 18 holes, you have to travel about 4 miles, either on foot or golf carts. 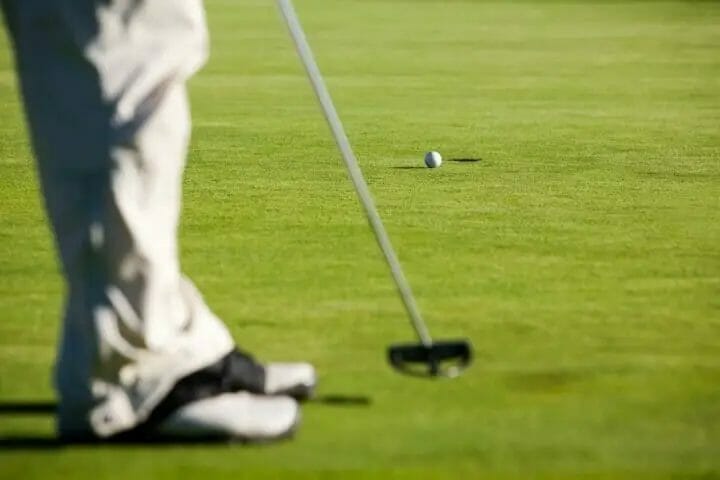 Varieties including mini-golf or lawn golf make the game much easier, however, it also takes out much of the healthier aspects of the game.

Bowling is a game of hitting targets (pins) with balls and is a recreational activity. Bowling alleys are generally 60 ft long at the end of which are arranged 10 pins. The players get marked on the basis of the number of pins that they are able to hit in 2 attempts.

You must be reasonably physically active to be able to meaningfully participate in a game of golf or bowling.

A card game is any game that is played with a set (or multiple sets) of playing cards and there are more than 100 card games that are popularly played, the most popular being poker, bridge and rummy. 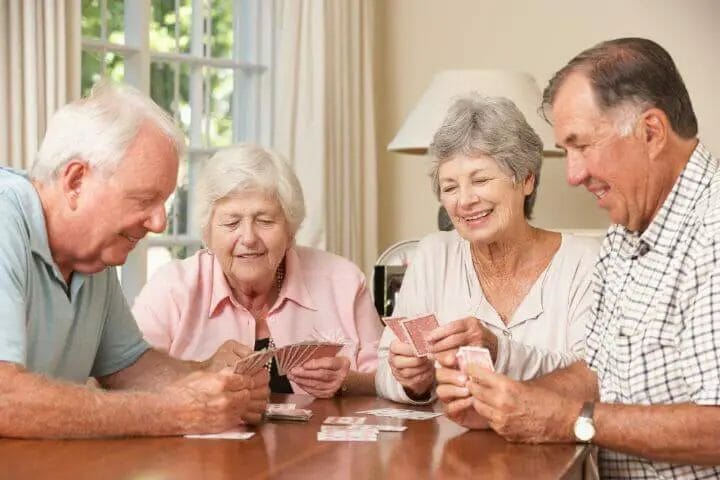 Luck, however, is a major factor in card games and the outcome of a game is significantly dependent on the cards dealt to different players.

There are many similar card games, like Uno for example, which you may want to try out.

A jigsaw puzzle is a tiling or fitting game that can be played by a couple of people and requires putting all the interlocking pieces together to form a final complete picture. It may be a timed game with the person completing the picture the fastest, winning the game.

There are a number of varieties of jigsaw puzzle games that will never let you be bored of them.

You may also like Best Sports For Autistic Boy

A trivia game or quiz is a competition where the players are asked questions about a certain topic or current affairs. They may also comprise of brain teasers or riddles which can be mentally stimulating and sharpen your thinking skills.

Dominoes is a group of tile-based games played by 2 – 4 players at once. Each tile is rectangular with a line going down the middle which divides the tile into two squares. Each square has zero to up to six markings. Before the game begins, the winning score is set and the first player to reach the score wins the game. 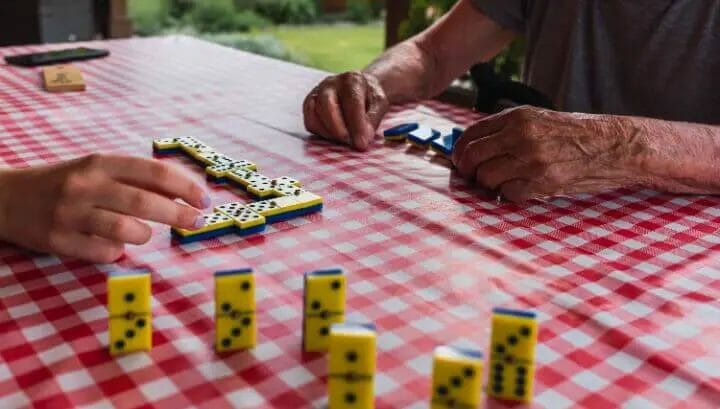 Dice games are a family of very popular games which are played by 2 – 4 players by rolling a dice and advancing your pieces on a marked board. The board generally has a target or destination; the player who is the first to reach the target gets to win the game.

You may also like How to Stop Shaky Hands When Gaming

Light-hearted party games or shorter games like passing the ball, cookie monster, defy gravity with balloons, threading needles, spooning ping-pong balls, are some enjoyable games and ways to bring together the elderly and entertain your guests.

Games for Improving Dexterity in the elderly

With old age you are at risk of developing musculoskeletal conditions which may lead to shaky hands and trembling fingers. Some games which demand fine motor skills from you will help you to keep these health conditions at bay. 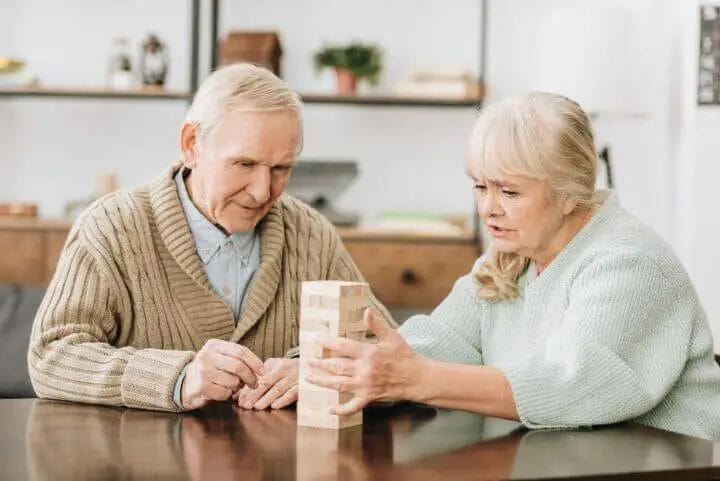 Games for Elderly People with Arthritis

If you are suffering from arthritis or osteoarthritis chances are that your joints are in constant pain. It is important that you engage yourself in activities and games to take your mind off the pain.

While physical outdoor games are unlikely to suit you, a good game of scrabble or an interesting jigsaw puzzle game can help you to forget about your arthritic pain and discomfort.

If you love sudoku or crossword puzzles, you can find gamified versions of them, where you can engage in friendly competition within your social circle or play with your family.

Games for Elderly People with Dementia

There are games which can help you to moderately exercise your brain and play a part in stopping, if not reversing, the process of cognitive deterioration in patients with dementia.

These games would include jigsaw puzzle-based games, word based games, card games and dominoes. Depending on the stage of dementia, you may be able to participate in more complicated versions of the above games.

Games for the Visually Impaired Elderly

If you are visually challenged, most of the above games are relevant for you, but with larger-sized font cards or playing boards. There are large print playing cards suited to players with low vision, while there are big-sized dominoes to play a variety of dominoes games.

For individuals with very little eyesight, dominoes and card decks with raised dots are available and can be a great way to spend an evening with your loved ones.

If age is just a number for you, you should try out outdoor games as frequently as possible. However, if age has caught up with you, there is no reason to be despondent.

A game of chess in the park with your neighbor, an hour of scrabble over the internet with your school friend or a family card game may just be what the doctor ordered.

With enough mental exercise through these games, it is quite possible to reverse or at least stagnate the aging process of your mind, which will make the golden years of your life more fulfilling and happier.