While managing pain is thought to be a very medical term, pain management also has political undertones. Public policy around medication and healthcare determines access to and the effective delivery of pain management.

With the opioid crisis widespread in North America, we are now in what some have called the “prescription drug abuse” era and again there is much public and professional debate concerning the nexus of pain and chemical dependency.

There is also a small but vocal debate on the efficacy and safety of opioid drugs in the management of chronic pain. There is an increasing case being made for the consideration of other options like physical therapy over opioids for managing chronic pain.

I have often thought that a careful telling of the history of pain management from the mid- twentieth century to the present would be instructive, possibly illuminating a way forward in the pain management wars.

So I was delighted to read Princeton University professor Keith Wailoo’s new book, Pain: A Political History, which tells the important narratives and trends that have defined our contemporary attitudes at pain management in the United States from the perspective of a professional historian. 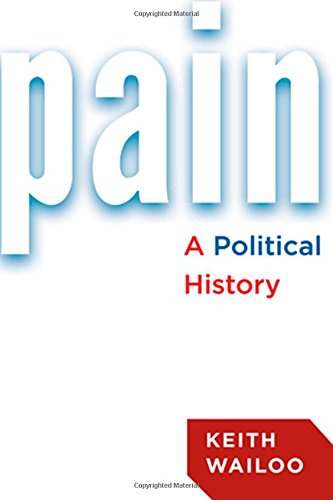 The central thesis of Wailoo’s book is that public policy concerning pain management in recent U.S. history has been a battle between liberal political philosophy based on compassion for the sufferer of pain, and conservative political philosophy that expresses apprehension about these liberal attitudes concerning pain and disability, charging that such policies promote “learned helplessness” and are ultimately destructive.

Wailoo unpacks the consequences of these battling political philosophies in interpreting specific historical examples, ranging from signing of social security disability legislation in the Eisenhower Administration in 1956 to the “unleashing” of OxyContin in the 1990’s and early twenty-first century.

Wailoo makes the interesting observation that both sides of the political spectrum have exploited policies associated with their adversaries.

For example, he points out that the creating of a disability entitlement under the Social Security Act (SSDI) was established by liberal Democrats in Congress, and embraced by moderate conservatives and ultimately endorsed and signed into law by Eisenhower, a Republican president.

He interprets the OxyContin abuses of the 1990-2000’s as resulting from interesting unintended consequences caused by the intersection of compassionate liberal philosophies to increase access to opioids joining with the conservative penchant for deregulation of the markets and industries, especially the pharmaceutical industry.

In addition to his interpretation of public policy concerning pain though this liberal-conservative lens, Wailoo also describes in a highly readable and accurate way, the clinical and scientific history of pain including Henry Beecher’s seminal work in placebo analgesia, John Bonica’s pioneering vision and clinical work established him as the “godfather” of the pain movement in the U.S. ultimately leading to the creation of the International Association for the Study of Pain, and the important scientific advance and paradigmatic shift in thinking associated with Melzack and Wall’s Gate Control Theory of Pain.

Wailoo also analyzes instances in which liberal and conservative perspectives of pain have co-opted and conflated very emotional political issues such as abortion and physician-assisted suicide.

There is a particularly interesting discussion of the paradox of arch conservative Rush Limbaugh and his well-chronicled problems with OxyContin abuse.

Wailoo tells how the dueling liberal and conservative philosophies played out in the unfolding and ultimate failure of Capps-Rodgers pain bill, some elements of which eventually appeared in the Accountable Care Act that required Congress to direct the Institute of Medicine to the study pain care in the U.S., ultimately leading to the 2011 report, Relieving Pain in America: A Blueprint for Transforming Prevention, Care, Education and Research.

In this otherwise carefully written book, there are a few minor errors, misrepresentations and incomplete or inadequate development of some important issues in the history of pain.

For example, Wailoo claims that OxyContin was represented as a “non-addicting” drug (p. 183). In my view this is was never true, although it can be fairly claimed that the marketing efforts around OxyContin minimized its abuse potential, particularly in what we now call high risk populations of patients with chronic pain—e.g., people with preexisting psychiatric and substance disorders.

Wailoo has essentially no discussion of what it means for chronic pain to be interpreted as a “biopsychosocial” phenomenon, the essential disappearance of multidisciplinary and rehabilitation focused pain management therapies, and the role of public policies in these circumstances. There is no discussion of the important advances in neuroimaging and the basic sciences that have led to a re-conceptualization of chronic pain as a “disease”, and what this implies in terms of future health policy in pain management.

At one point Waillo quotes the anthropologist Tala Asad who said that “The modern nation as an imagined community is always mediated through constructed images.” This is an apt description of the state of affairs in pain management since the mid twentieth century—dueling images and narratives juxtaposing the tensions of the “undertreated” suffering pain patient versus the undeserving and sometimes criminal “drug seeker”.

This book should be read by patients, clinicians and policy makers who wish to understand the recent past to guide future advocacy, public engagement and policy as we seek to fulfill the great ambition of the Institute of Medicine’s pain report– to change the way chronic pain is perceived, managed and judged—for the betterment of all.